A way to practice the ZJU Mottos:
True Arc of Pragmatic Inquiry.

Zhejiang University encourages all its faculty members and students to follow the spirit of “pursuing the truth, being rigorous and earnest, exerting oneself for never-ending progress, and pioneering new trails”. In short, the university motto is “Seeking the Truth and Pioneering New Trails”.

Note the motto of the Economics Department: “weaving social fabric…benefiting people.” That is – or should be – the real purpose of economics.

Zhejiang University is one of China’s oldest, most selective, and most prestigious institutions of higher education. The university is organized into 37 colleges, schools, and departments offering more than 140 undergraduate and 300 graduate programs. (From Wikipedia)

It is in one of the most beautiful cities in the world and recognized as such by UNESCO who held a conference in Hangzhou just months before our visit.

Establishment of dedicated ecological civilization areas for experimenting with legal, regulatory and administrative incentives that would facilitate the march towards the ideal is encouraged. Chinese biosphere reserves which are designated with the explicit aim of building harmony between humans and nature would be suitable candidates for designing and developing such dedicated ecological civilization areas.

This constitutional adoption and Conference on sustainable cities became the basis of our work with a group of students at Zhejiang.

We based the Lab around the recent addition to the Chinese Constitution that China would be dedicated to developing a what they call Ecological Civilization. We tied this to a conference that was held recently in Hangzhou, shown above.

The premise of the Lab was a simple one: we asked the students what opportunity to solve some problem or issue they could inquiry into to further develop their internationally renowned city as a sustainable city contributing to the Ecological Civilization of China.

We were continually pleased and impressed that our audiences seemed to understand and embrace our unique American philosophy and gave some credit to the fact that the spirit of Dewey’s lectures were still alive. But the awareness went deeper. One scholar asked if we were familiar with the Confucian Great Learning essay He then showed us the five steps that Confucius recommended for forming character.

As we study these, we realize that these are exactly the five steps that the American pragmatists had recommended and combined them in our spiral arc of inquiry, starting with Thomas Jefferson’s Declaration of Independence – 250 years ago. Of course, we are often reminded that the Chinese have been developing their philosophies for over 5,000 years starting with the Yellow Emperor’s enduring I Ching (Book of Change)!

In the Lab, with presentations from each of the 5 members of the team, (see Agenda and Faculty) of special interest to bridging East and West philosophies was the presentation by Christopher Wray who presented his work on “Full Mind.” Here is how he described it:

Full Mind®: Cultivating Cognitive Values for Complete Intelligence
Integrating two key streams of research in cognitive science and the psychology of decision making that had previously remained siloed, Christopher Wray’s newly published research shows how human judgment can be developed beyond IQ with 10 practices for reflective, critical and creative thinking and deeper understanding of the self and others. Unlike IQ, which is broadly stable over an individual’s lifetime, these cognitive values can be taught, cultivated and deliberately applied to enhance leaders’ decision-making in complex or volatile environments. See Wray’s paper – draft. Here is how he graphically shows the practices.

So the pragmatic method of inquiry is deeply embedded in our East and West cultural, political and philosophical – and cognitive – character.

It simply means that we must put our beliefs, values, virtues in action and test them. And based on the evidence to continue to learn. The stance of a pragmatist is one of questioning and doubt – the stance of a learner, always beginning, and always in action. It is often called a process philosophy – a practice, a discipline.
所以实用主义探究的方法深植于我们的文化、政治和哲学特点之中。
也就是说我们将我们的信仰、价值观和品德付诸实践进行检验。根据所获得的证据继续学习。实用主义者的姿态是一个学习者的姿态，不断质疑，不断开始，不断实践。它通常被称为一个过程哲学-一个实践，一个学科。 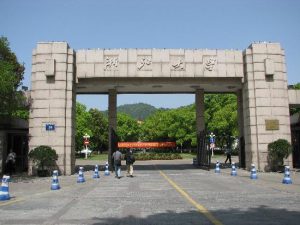 Dr. Nahser was appointed Professor of Ecological Economics and Pragmatic Philosophy at the University in 2016. 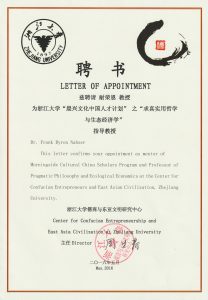 Stephen ChingChun Meng 孟慶俊 of Leadership Dynamics International, an alumnus of both UVA & NCSU, founder of Junior Achievement in China (www.JAChina.org). a member of http://www.JAWorldwide.org/nobel since 1993, was re-appointed in 2016 together with Dr. Ron Nahser as Strategic Leadership Advisor of the Center for Confucian Entrepreneurship and East Asia Civilization http://www.zjurs.net/article?type=details&id=197 at Zhejiang University, an Researcher since the Center’s inception in 2006. 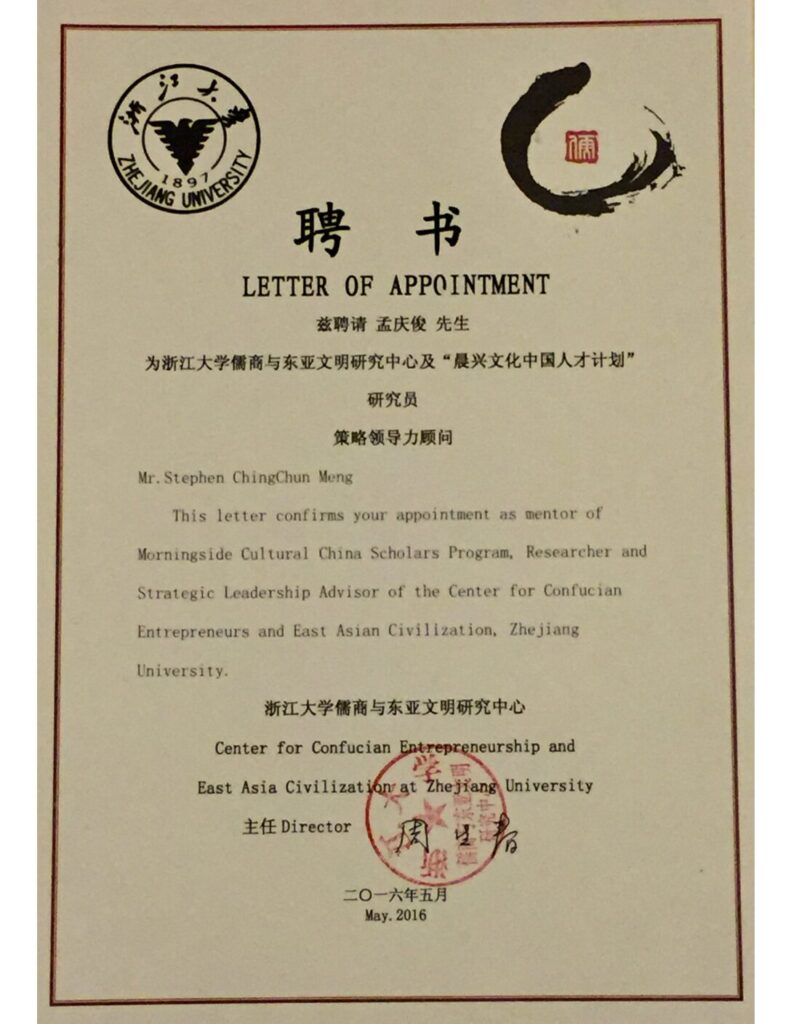 Stephen was the bridge and catalyst for the first Pilot of True Arc of Pragmatic Inquiry & Creative Strategic Leadership for Sustainability Course at Zhejiang University in 2016 with Dr. Ron Nahser, Jane Corbett from Cambridge University, Chris Wray of Oxford Quantum Institute & Tony Qian Liu of BiMBA of Peking University.